The store will not work correctly in the case when cookies are disabled.
Menu
Toggle Nav
Account
SERVICE UPDATES  CLICK & COLLECT  FREE DELIVERY OVER £300
Due to the current situation, we are expecting delays to our delivery times which means next day deliveries cannot be guaranteed.

Curing the problems of mould

If mould is left unattended it can not only permanently damage the surface or material that is contaminted, but also had adverse effects to your health.

The Mould Away product range is your solution to cleaning, removing and preventing future mould attacks. Through the use of specially formulated biocides and fungicidal agents, Mould Away products will keep your home mould free.

There are 2 main products within the Mould Away product range. We have developed a 2 stage process for cleaning, removing and preventing mould. 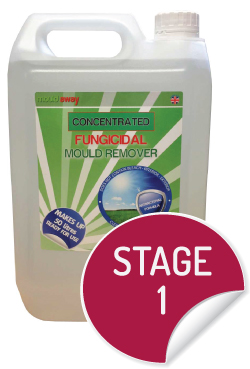 Mould Away Concentrated Fungicidal Mould Remover is a cost effective concentrated cleaning solution for cleaning and removing mould and black mould from most surfaces and materials.

Remove mould from walls, tiles, concrete, window sills, shower curtains, grout, fabrics, around bathroom and kitchen sinks, baths and shower areas. Mould Away Concentrated Fungicidal Mould Remover does what it says – uses a specially formulated fungicidal agents, scientifically proven to clean and remove fungal growth from surfaces and products. Mould Away Concentrated Fungicidal Mould Remover works effectively on most areas inside and outside the home.

Mould Away Fungicidal Anti-Mould Paint Additive can be applied to any type of paint – converting conventional paints into an anti-mould coating that will prevent and repel mould.

Developed to deliver a safe, simple cost effective treatment for: